What Happens at George’s

“What happens at George’s, STAYS at George’s!” – The Paradise Plantation Bovine Initiative

A little over a month ago, my cows were moved across the road to our neighbor’s. We affectionately dubbed it the Bovine B&B. With the heat of the summer, grass was in short supply. George no longer had cows, but could really use the help in getting his pastures mowed. So we moved cows. It was a win/win situation.

This past week, we began the task of moving them home. For the most part, all it took was rattling some Range Cubes in a bucket. Within a few minutes, we had all but Birdie, our bull, corralled. Like the Pied Piper, I led cows down the road and through our gate.

It was then time to go hunt for Birdie. I asked the girls where he was, but instead of an answer, I got some startled glances before they all quickly began to move away. As I turned back toward George’s, I could have sworn I heard a snicker or two. I just put it down to my imagination.

It took a few minutes, but finally The Country Boy found Birdie where he shouldn’t be – in a back pasture, on the other side of a barbed wire fence. A rule of thumb: If a cow is someplace it shouldn’t be, give it a few minutes. It will more than likely show you where the hidden ‘door’ is. And Birdie did. There was a small opening beside a tree and well-hidden behind some vines. He went straight through, without a misstep. The Country Boy, on the other hand, almost tripped on a low and hidden strand of barbed wire, and got his hat knocked off by a high strand. 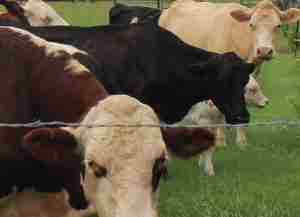 I watched as Birdie strolled across the pasture, wearing a smirk like you wouldn’t believe. As I led him home, I watched as the other girls either shook their heads at him or snickered. That is, until they noticed I was watching. Suddenly, that grass looked awfully delicious to every single one of them, and they almost frantically began eating again. Birdie swaggered through the gate, nudged a couple of the girls, winked at them then moseyed off to check out what was on the menu.

All the cows may have come easily, but unfortunately their offspring did not. It took another hour to get all the calves back across the road. There are a few of those that we figure are going to grow up to be juvenile delinquents, because each one of them were sampling from all the Mama’s. Trying to figure out which calf goes with which cow is going to be a chore for a while. At least most of them are in the same pasture. We only have one calf that refuses to cooperate. Bossy and Scratcher were moved to the barn pasture. Scratcher’s baby is with her, but Bossy’s isn’t. He is still being elusive, but content, as he is probably the biggest milk thief we have. And Bossy is not happy about it, which makes her difficult to milk. 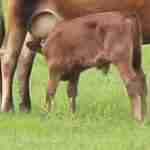 On the surface, life in the pastures seems to have returned to normal. But I have noticed something odd. All of the cows have begun to look at each other in weird ways. There are glares being tossed between a few of them, suspicious stares, and when one cow moves, the others that are close by seem to chuckle.

I don’t know if I will ever figure out what happened at the Bovine B&B – none of them are talking – but I am almost considering removing it from the cows’ approved list of vacation destinations.