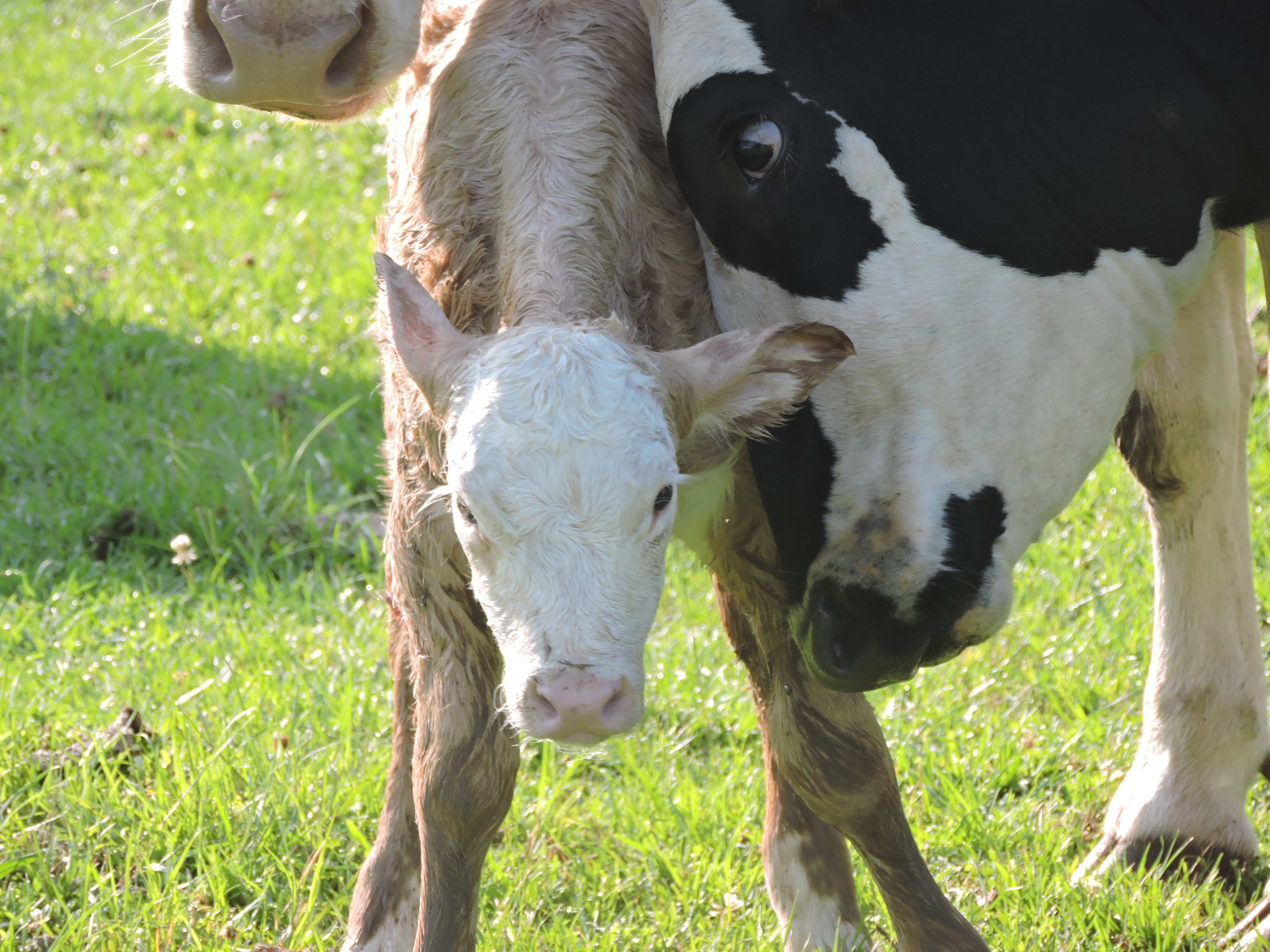 There is nothing in this world that will set your heart aflutter faster than a new baby on the farm.  Especially when it is a surprise.

Black Bart came to stay with us in November.  Bart is the son of Elvis – our first bull.  Elvis was sold to Danny, one of our neighbors, and between Elvis and one of Danny’s girls, Bart was produced.  Bart was raised up to be a herd bull, and with Danny’s grace, he has shared him with us for the past several years.  This year, we weren’t quite prepared early enough, so Bart made his regular visit in the late fall.  We gave him a few weeks to do his thing, counted on our fingers, and came up with around August for the first calf.

We do have a herd bull – Birdie – but he is still very young, and tends to be a Mama’s boy.  He is also somewhat of a Houdini, being able to escape pastures and cross over fences without leaving a trace of where he got out.  When we separated him from his Mama to wean him is when we figured this out.  We would secure him in the weaning pen, and the next morning he would be back in the pasture.  We decided to move Stickers (his Mama) into the weaning pen and leave him in the big pasture, but she disassembled the gates with her horns and went back to grazing with her son.  In the end, we decided to quit fighting it (besides, we were tired of chasing cows out of our neighbor George’s yard), and just let Birdie stay.

On June 1st, Kevin – Danny’s son – came to talk to the Country Boy about cutting hay.  While they were visiting, Kevin noticed a calf on the ground.  The Country Boy hollered at me, and I headed out with my camera.  Sure enough, one of our Charolais-cross heifers had had a calf.  After we oohed and aahed for a bit, it suddenly hit us.  Our hands came out and we started counting on our fingers.  November, December, January…. Things just weren’t adding up.  If finally dawned on us…

We had noticed in the past that Bart didn’t seem to be getting much action.  Since we don’t have time to just hang over the fence all day, we just thought that maybe he was doing his job when we weren’t watching.  But apparently, Bart has had some disappointments lately, because Birdie had already taken care of things.  (Hmm….maybe that has a lot to do with Bart picking on Birdie all the time…)  Birdie might still be young, but apparently we chose well in selecting him for our next herd bull.

As I stood in the pasture, admiring our new little one, and falling head over heels in love…again… I noticed that Pinky Diva II – one of our young heifers – also was fascinated with the new baby.  In the traditional Meet and Greet that cows do when a calf is born, Pinky took it a step further and gave the calf the best welcome in the world – a calf hug!  As the days have gone by, I love watching Pinky as she follows the new baby, and gently plays with him/her.  (Yes, we have been having a bit of trouble getting close as Mama still isn’t sure what that thing is, but whatever it is, it is HERS, and she isn’t going to allow us too close.  But by today’s end, we will know for certain if it is a bull or a heifer – with the assistance of as many Range Cubes as it takes.

Welcome to the world, Little One.  And thank you Pinky Diva II for being such a great friend and babysitter!