The Flavor of Life

I have noticed lately how much my tastes have changed. I grew up in a home where the only ‘canned’ items I ate were usually purchased at a grocery store – with a coupon. Home canned items, that I can remember, were limited to Aunt Dot’s Peach Preserves and Aunt Evelyn’s Sweet Pickles. I still remember how delicious those two items were, but although Mom would buy sweet gherkins in a jar, rarely did she ever buy peach preserves. Consequently, there wasn’t much chance of comparison. All I did know was that I preferred Aunt Evelyn’s pickles.

The other day, I picked the first of our Burgundy snap beans, a few pods of okra and the first two Roma tomatoes from our garden. Throw in a couple of baked chicken breasts and I knew I had the makings of a delicious meal. I washed and snapped the beans, cut up a couple of fresh potatoes that were dug up down at Danny’s and put them in a big bowl. In a pan, I fried some bacon that I had cut up, then added some chopped onions and sautéed them a minute or two until they were soft. Then I tossed in the beans and potatoes, a little seasoning and covered all with water. While they simmered, I prepared the rest of the meal. Steamed okra. Sliced tomatoes. Chicken dipped in melted butter and then tossed in herbed bread crumbs mixed with a little parmesan cheese. Next thing you know, dinner was served.

As I feasted on that meal, it hit me that I hadn’t eaten any green beans in quite a while. The last batch I took out of the freezer was sometime last winter. I thought about it for a moment, and then realized why. I don’t like green beans in a can. I don’t care what brand, they just do not have the same flavor or texture that home grown snap beans do.

The reason behind that is, I can control the quality of the beans that I grow myself. As I pick the beans off the vine, I can choose the ones that are ripe, and leave the ones that aren’t. If any have over-ripened, I can pull them off and feed them to the cows or chickens as a treat, or leave them alone and use them for seeds for next year’s crop. As I wash them, I can sort them again, if necessary. And when I snap them, I can toss the ones that are ‘soggy’ and don’t ‘snap’ when they are broken. By the time they hit the canning jar, freezer bag or my pot, I know without a doubt that those beans are about as fresh and delicious as you can get.

The same goes for all the other vegetables and fruits I put up. My tomato sauce tastes like freshly pureed tomatoes, and don’t have that over-salted slightly metallic taste that some commercially canned sauces do. I can taste the apples and blueberries in my jam. Peach halves taste like fruit fresh from the trees and not like the heavy sugar-syrup in those purchased at the grocery store.

Don’t laugh, but the last few times we have gone out to eat, I have noticed that the food at a steak restaurant tastes all but the same like the food at a Mexican joint or Chinese buffet. To be honest, there isn’t a whole lot of flavor in any of them, other than the heavy spices at the Mexican place. However, I don’t go to restaurants to eat a jar of spices. I would actually like to taste beef, chicken, pork or fish. The spices should be subtle but complimentary to whatever food is on my plate – not a method of hiding it.

This is one of my favorite life lessons on the farm: To have a garden of one’s own. To preserve the harvest you have worked so hard to produce. To till the earth, pull the weeds, tie up the plants, train the vines, and to wash and prep the produce. This, my friends, is the true sweet flavor of life.

thefarmwife@yahoo.com
Julie Murphree is a blogger, newspaper columnist, and speaker on all things ‘Living a Simple Life on the Farm’. She is the author of \'The Farm Wife – Living a Simple Life on the Farm.She and her husband have 60 acres in NW Louisiana where they actively work on living as sustainable as possible.
Author: thefarmwife@yahoo.com
Filed Under: Gardening
First Harvest
Friendship Garden 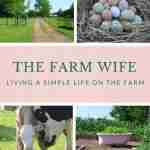 Check out the 99 cent seeds!