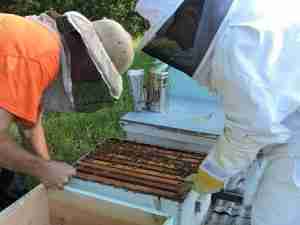 As a grand idea, it is becoming more and more obvious that keeping bees is a great concept. I love how they are self-sufficient. I love that they don’t take up much space. I love the fact that they need very little attention. There is one thing that I am not really wild about. Propolis.

What is commonly referred to as ‘bee glue’, propolis is a substance that the bees use to fill cracks and crevices, and is an antiseptic agent when used to cover up an invader in the hive, such as a mouse or moth. The bees gather resin from tree buds when the weather is warm enough to make it soft and pliable. As the worker harvests it, she adds some wax flakes then forms it into a ball. From there, she tucks it in the pollen pouch on her leg. Once the pouch is full, she heads back home to unload it. The hive workers then use it as filler or a funeral shroud for that unlucky intruder.

One of the first tasks I had to do when shifting my new bees from their nuc to their permanent hive was to scrape the propolis off the frames. Immediately I began to wonder. How can something be as sticky as a strip of fly paper, yet as hard as cement? It took a hive tool, which is similar to a small pry bar, to chisel and crack the propolis used to seal up the hairline cracks between the nuc body and the cover. One end of the tool was then used to scrape it off the frames. I have figured out that the majority of the time spent in tending bees is used dealing with this red gunk. It almost reminds me of Mama’s spit. That stuff could clean a face and keep Alfalfa’s cowlick permanently glued to his head, but no matter how much you rubbed, it wouldn’t come off. 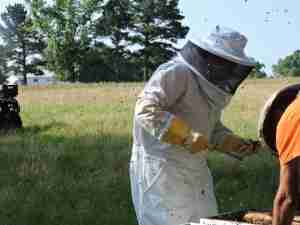 I figured that the propolis was used only as the bee version of cement. Imagine my surprise when I discovered it has been used for almost as many centuries as the world is old for its health benefits to humans. Used as an antiseptic and to increase the viability of antibiotics. It is used as an antioxidant, and can help to rebuild red blood cells as well as for other benefits. It can be taken in capsule form or as a lozenge. It can also be found in an oral rinse to help with gum and mouth issues. It seems to help with or cure so many things it is no surprise they consider it a Wonder Drug.

When the Country Boy came home yesterday complaining about a leak in the boat they are using at work, my first thought was, “I wonder if the bees have created enough propolis in their new hives to seal the holes in the boat.” My only problem with that is, from experience I have yet to figure out how to get that stuff off my gloves or hive tool without a chisel, much less how to rehydrate it so it will work.

Hmmm…could this be another one of my grand ideas? I wonder just how much income propolis can create, and how much work it will take to harvest it. Guess I better go do some more research!