Firearms on the Farm

Firearms on the Farm is just a way of life. We live a simple life. But as I have said before, simple doesn’t always mean easy. Sometimes we have to do the hard things. Like bear arms against a predator. There is nothing more helpless feeling than being faced with a coyote who is attacking your cattle, and having nothing to use as defense.

Or coming face-to-face with a water moccasin that is coiled up between you and the pathway out. Sometimes, having a firearm is the difference between affordable food on the table or spending your hard-earned money at the grocery store.

The Remote Life Needs Firearms on the Farm

Living in remote rural areas also means that neighbors may not be close by. If there is a threat to you or your family, you don’t want to just throw your hands in the air and allow someone else to take everything you have worked hard for, or worse yet, take your life and the lives of your family. As much as I hate the idea, firearms are a necessity on the farm.

Firearms on the Farm? Okay. But which one? How many? Which type works best for any given situation? Let’s start at the beginning: 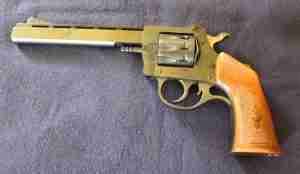 Pistol – The Most Common  of the Firearms Choice

A pistol is a must option for a firearm on the farm. They come in many sizes. They range from a Derringer (a single shot percussion pistol with a barrel of 1.5” to 6”), often seen in the old westerns; pocket pistols; to the ‘Dirty Harry’, a Smith & Wesson Model 29, chambered in .44 Magnum.

When I meet a snake in the pasture, that is the gun I usually wish I had, but I also know that about one-half second after I pull the trigger, the snake might be dead, but I wouldn’t know. I would be about a half-mile down the lane because of the recoil.

Instead, a reasonable alternative would be a .22 or a .38. I confess to preferring ‘Skippy’, my Charter Arms .44, which is a smaller pistol than Harry’s, but I still need practice and balance before that becomes my go-to choice. 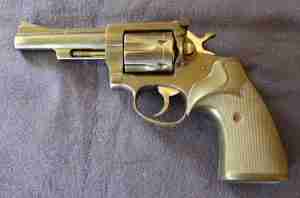 Although an easy gun to shoot, the .22 does have its downside. In order to use it for predators or protection, you need to be at close-range. Yes. They are fatal. Yes. They can do serious damage. But to do so, and for accuracy, you have to be super close (fatal), or no more than 25 yards away from your target (serious damage).

This also highly depends on the skill of the shooter. Skilled shooters may easily be able to hit their target with a .22 pistol at 85 yards or better. For predators and snakes, a better option may be a .38. 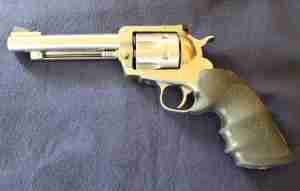 For personal protection, you may want to consider something a bit larger in caliber, such as a .38, a .357, a .44 or a .45. The Country Boy prefers a .44 Magnum or a .45 Colt, but again, those are a bit powerful for me. (The difference between a .44 and a .44 Magnum has to do with powder capacity and pressure, but that’s a subject for another day. And only if the Country Boy writes that post, because he hand loads. I don’t.)

Rifle – Handy Firearms to Have

The photo is of a .22 rimfire. The difference between a .22 pistol and a .22 rifle has to do with accuracy, because with the rifle you will have a longer sight plane. They both shoot the same bullet. These are best when going up against a small predator, such as a possum or raccoon in your chicken house.

Let me say this about predators. Before you aim, make sure you are not aiming at a protected species. A red fox and hawks are federally protected. Shooting these animals will get you a one-way ticket to jail, or to the pawn shop to hock your farm.

Another option to have is a 30.06. This is a favorite for deer hunters, which also means it made the list of firearms for the farm. It is primarily used to hunt large game, such as deer. It can double as large predator protection, such as a coyote.

Shotgun – Our Recommendation for Firearms on the Farm

Our preferred shotgun on the farm is a 12-gauge pump action. Shells are common and easy to find at most stores that sell ammunition. It is good for both hunting and predator protection. And I don’t think a would-be thief would enjoy looking down the barrel of one when he attempts to break in. Even better, the sound of ‘racking the slide’ will send them running long before they reach the door.

Another option would be a .20 gauge shotgun. This gauge is a good fit for small-framed people. It is lighter on the recoil, has a smaller payload, as far as shot goes, and the gun doesn’t weigh as much as other gauge shotguns.

However. Never underestimate the ability of a small framed person. My Daddy made the mistake of pestering my Mama into shooting his Browning Sweet 16 (a 16-gauge shotgun designed by John Browning) when they were first married. He stuck a nickel in the fork of a tree limb for her to aim at. Let me just say this – she still has the nickel with a hole in the middle, and Daddy never pestered her about shooting again. Or about much else, for that matter.

The one thing to know about having a firearm on the homestead is that what you have is based on personal preference. One man’s .22 is another man’s .44 Magnum is another man’s 20 gauge. Some prefer a pistol, others will reach for a rifle first, and still others keep their shotguns handy.

Regardless of the type, having a firearm on hand could very well mean the difference between life and death. It can mean an affordable way to feed your family, and a means of keeping them safe. 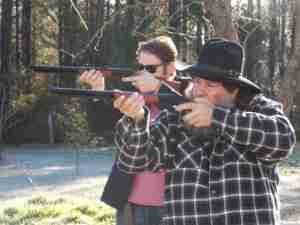 Before I end this, I strongly feel the need to say a few things about firearms on the farm, or anywhere else.

Things To Know about Firearms

• Don’t go off ‘half-cocked’. I don’t care how ‘easy’ you think handling any firearm is. If you have never handled a gun, much less pulled a trigger, I strongly advise you to take lessons from a professional. If you have used one, but still aren’t comfortable, have a professional work with you.

Any time you pick up a firearm of any size, shape, or caliber, you are exposing you and anyone and everything around you to potential harm – if not death. KNOW what you are doing, why you are doing it, and how you need to do it.

• Clean your firearms regularly. If you don’t know how, learn. And long before you clean it, check to make sure it is unloaded. And then check again. Check the barrel. Open the cylinder and look. Double check every inch to make sure there isn’t a bullet or shell.

• When storing a firearm, make certain the safety is on. If children are in the house, add a gun lock. Don’t think for one second that because you have stored it ‘in the top of the closet where they can’t reach’, that they won’t climb up and get it. Firearms are mesmerizing to children. They seem to be drawn to even the best hiding spot you can think of. Even better – invest in a gun safe, keep it closed and locked, and don’t let the children have the combination.

When in Doubt about Which Firearm to Have

If you aren’t sure about whether to have a pistol, a rifle or a shotgun, try them all. Contact your local shooting range and talk with the Range Master to see if they will rent firearms so you can find what is suitable for you. Learn what is comfortable. Determine which one you can handle well. Consider the cost and availability of the ammunition. Then make your decision.

The Country Boy has always said that if he was only allowed one firearm, he would choose the 12-gauge shotgun. It’s versatile. Ammunition is convenient to purchase and easy to hand load. And as far as the price of the actual firearm goes, consider anything you purchase as an investment.

One More Thing about Firearms on the Farm…

One other thing I need to add here. This is by no means a detailed list or information on any of these firearms. Firearms in and of themselves is a very broad subject. Each enthusiast has his or her way of viewing the accuracy, the viability, and the justification of any given gun. I respect their opinions, just as I hope they will respect ours.

As far as ammunition goes, the Country Boy hand loads, so I haven’t even attempted to discuss that here, as my information may not be accurate as far as factory ammunition goes.

Firearms are probably one of the most personal expenditures a person can make. On some occasions, we are blessed with one that has been handed down within the family. In that case, we take what we are offered. But having one on our farm is truly a necessity.

There is nothing like filling the freezer with fresh meat. Knowing that your livestock has at least a secondary layer of protection is comforting. And knowing you can protect your family will help you sleep better at night. Firearms on the farm, or anywhere else for that matter, aren’t for everyone. If you aren’t comfortable with them, don’t have one. But as for me and my farm, I have options.

Want to consider another form of protection? Check out Annie’s post!

The Benefits of a Trained Protection Dog