Historically, eating breakfast wasn’t even a consideration. The early Romans believed anything other than one meal a day was considered gluttony. But in the early 16th Century, farmhands were expected to work from 5:00 am until late evening, so they depended on a large breakfast, usually provided by the landowner.

Today, a ‘farmhand’ breakfast is thought to be a large meal. My dad was raised in Tennessee, so Country ham with red-eye gravy was often on the table. Also served was sausage, bacon, grits, eggs and biscuits. The meal was primarily proteins, with the carbohydrate exception of the biscuits and grits. Supposedly, the energy from the proteins helped them work longer, harder and better. Of course, there was a break after eating such a heavy meal like that, in order for all that food to settle. 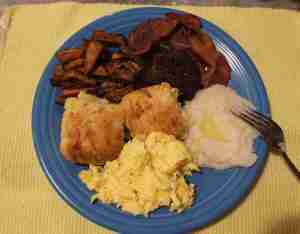 For many years, we had just such a breakfast once a year, on Christmas Day. After we opened the gifts, we usually moved our celebration to Aunt Dot’s house, where we would find the table laden with all of the above – except the grits were cheese grits. On both ends of the table were jars of homemade jams, jellies and preserves, from peach, plum,  and blackberry, to whatever else she happened to put up that year.

This tradition has passed by the wayside now, but there are days when I wish I could eat like that every morning. I don’t, though. With all the hot, backbreaking labor that I do outside, I wouldn’t be able to move with a belly that full.

However, I do indulge some Saturdays – especially if it is raining. The Country Boy will whip up some breakfast potatoes. Breakfast potatoes are similar to hash browns, and usually includes onions, bell pepper, and leftover steak which he dices up. I will make up a batch of those Christmas Cheese Biscuits. As soon as they come out of the oven, I grab a towel to protect my hand from the heat, slice it open and slip in a pat of butter. Yes, I do that even before we sit down with our potatoes and eggs. Who can resist a fresh baked biscuit straight out of the oven?

Breakfast now may only consist of a cup of yogurt, some fresh fruit or maybe just a cup of coffee, but our hearts still yearn for the days when we had time to stop and enjoy a hearty first meal of the day. After writing this post, I am praying for rain on Saturday. What I would give for some of the Country Boy’s potatoes and watch a fresh biscuit bounce from hand to hand while I try to get it buttered.
Fresh hot biscuits, anyone? Visit me over in the Kitchen for Aunt Dot’s Cheese Biscuit recipe!